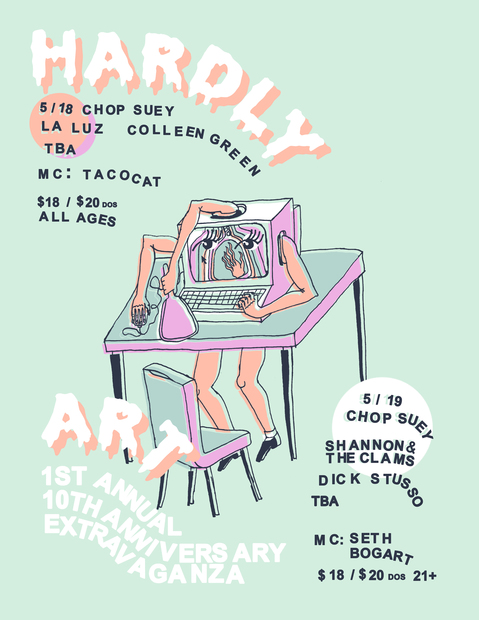 Credit: Flyer by Cody Blanchard
Hardly Art! It’s a label, it’s a phenomenon, it’s a presence that we hope you have appreciated and/or at least somewhat noticed over the past decade. 2017 marks the 10th anniversary of us, and to celebrate, we are hosting a grand ol’ party this May at Chop Suey. TWO grand ol’ parties, in fact – one night will be all-ages, and the other 21+. Both...

Lala Lala Announces New Album, I Want The Door To Open, Out October 8th on Hardly Art; Watch the Video for “DIVER”
July 13, 2021

Girl Friday share "You're Getting a Dog” a new track from their double A-side single available now at all DSPs from Hardly Art
July 7, 2021

Jenn Champion + Oyster Kids share “Push” The new single from the Love Nobody EP Out today worldwide on all DSPs from Hardly Art
June 29, 2021