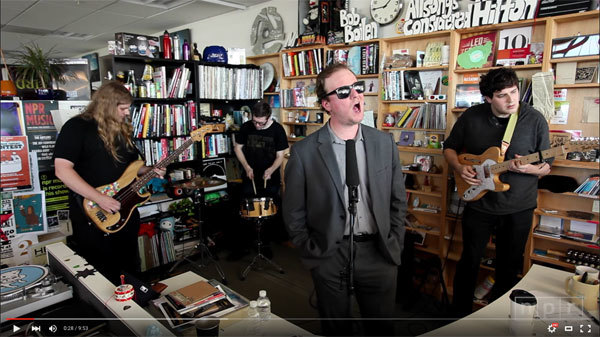 Protomartyr have just returned from an extensive tour in Europe, and after getting some much needed rest over the holidays, will be back to road-dogging it across the country in 2016. Touring in support of their critically acclaimed third record, The Agent Intellect, they'll begin by making up some cancelled dates in late January before embarking on a mammoth month-long tour, followed by a return to Europe in April. Joining them for extended stints in the US will be bands of such ass-kicking nature as Amanda X, Priests, Spray Paint, and Chastity Belt. Tickets for these shows go on sale today at noon EST -- find all details for both US and overseas dates on the tour page.

Also, NPR Music has shared their Tiny Desk Concert that the band recorded at the NPR office in October. Watch their amazing stripped-down performance here, featuring Agent Intellect stand-outs "Why Does It Shake?" and "The Devil In His Youth," as well as a glorious oldie from their first record, "Three Swallows." Pitchfork also recently shared a powerful fully plugged-in performance from an event in New York City. It's hard to dispute the band's power live after watching "I'll Take That Applause." If you haven't yet, discover one of the best and most affecting records of the year right here.