Despite having recently relocated to Los Angeles, La Luz – whose 2015 metaphysical rave-up Weirdo Shrine was the subject of many well-deserved critical plaudits – are already hitting the road once again. See the tour page for a full list of upcoming tour dates, including appearances at SXSW and the Sasquatch! music festival, and performances in just about every dang market there is, including stops in Canada.

Haven’t picked up a copy of Weirdo Shrine just yet? Well well. Get yourself on over to our ever-convenient (and open to your commerce-related whims 24/7) shop page. 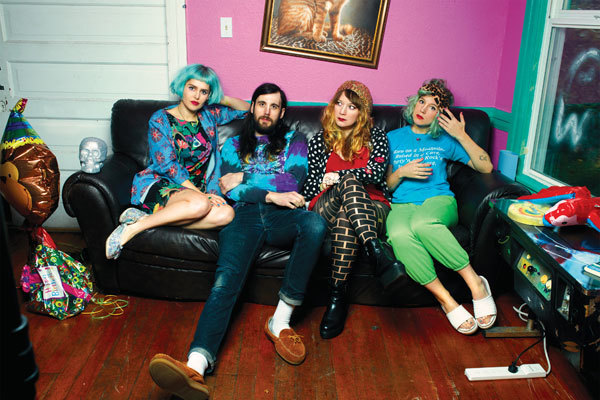 This morning, Pitchfork shared the news that Tacocat are the performers of “Who’s Got the Power?”, the new theme song for Cartoon Network’s re-imagining of The Powerpuff Girls, airing this Spring. They also shared “Talk,” the second single from the band’s highly-anticipated new album Lost Time, which is due out on LP, CD, digital, and cassette formats on April 1st, 2016. Stream or download “Talk” here or via the image above, and watch the title sequence for The Powerpuff Girls here.

Limited edition color vinyl pre-orders are available now through our webstore. Check the tour page for a full list of upcoming US and international tour dates.

Next Friday, February 19th, Hardly Art will release Die Alone, the debut LP from Seattle’s idiosyncratic “whoa-pop” outfit Gazebos. Starting today, you can stream their entire record via Impose Magazine (including must-hear covers of Long Beach punk band Suburban Lawns and “There Are Worse Things I Could Do” from the Grease soundtrack).

The band will celebrate the release of Die Alone next week will multiple events in their hometown: a free, all-ages in-store performance at Sonic Boom Records at 6 PM on Thursday evening, followed by a listening party/bingo night at Speckled & Drake at 7 PM, with a record release show Friday evening at Chop Suey with Midday Veil, Wild Powwers, and DJ MF CAKE. See the tour page for a full list of upcoming dates.

Pre-orders for Die Alone (with vinyl on clear with highlighter yellow mixed in! Ooo la la) are available here.

Today marks the release of Die Alone, the debut album from Seattle outsider pop four-piece Gazebos, which is being hailed as “a solidly entertaining listen for those who like their pop music a little off-kilter” (The Seattle Times) that “sprang from some eternal glittery, skinny-tied 1979 of the mind” (The Stranger).

To celebrate, the band has shared a new music video for their song “I Don’t Wanna Be Here” from director and recent Sundance Jury Prize winner Carlos Lopez, which premiered this morning via BUST. Lopez’s video is without a doubt one of the funniest and most vibrant Hardly Art has ever put its stamp on.

The band is also headlining a record release show at Chop Suey this evening in their native Seattle, and will be opening for Shannon and the Clams across the US this Spring. See the tour page for a full list of dates.

Get your week off to a weird start with this surreal new music video from Seattle’s Gazebos, whose debut LPDie Alone is out February 19th. This morning, Noisey premiered the clip for “Just Get High” (directed and animated by DAISYHEROIN), which is mind-altering enough even without chemical enhancement. Watch the video by clicking here or the .gif above.

In addition, Gazebos have announced new tour dates in support of Die Alone, opening for labelmatesShannon and the Clams this March. The band will also be appearing at SXSW 2016. See the tour page for a full list of dates.

Today, Protomartyr share a video for their song “Dope Cloud” (from their critically acclaimed album The Agent Intellect), which was directed by self-proclaimed Protomartyr fan Lance Bangs. Bangs, known for directing music videos for the likes of R.E.M., Pavement, Sonic Youth, Nirvana, and Arcade Fire, was simply drawn to the song and made the video on his own time and submitted it to the band. The video shows the demise of one of the last phone booths in the country. Watch it here or by clicking the image above.

Meanwhile, Protomartyr continues their massive tour, which has them basically playing everywhere humanly possible. New Canadian, east coast, and European dates have been added. Also, a few recent items worth checking out that you might have missed recently are a large profile on the band on Noisey and Joe Casey’s appearance on The New York Times’ Popcast with critic Ben Ratliff.